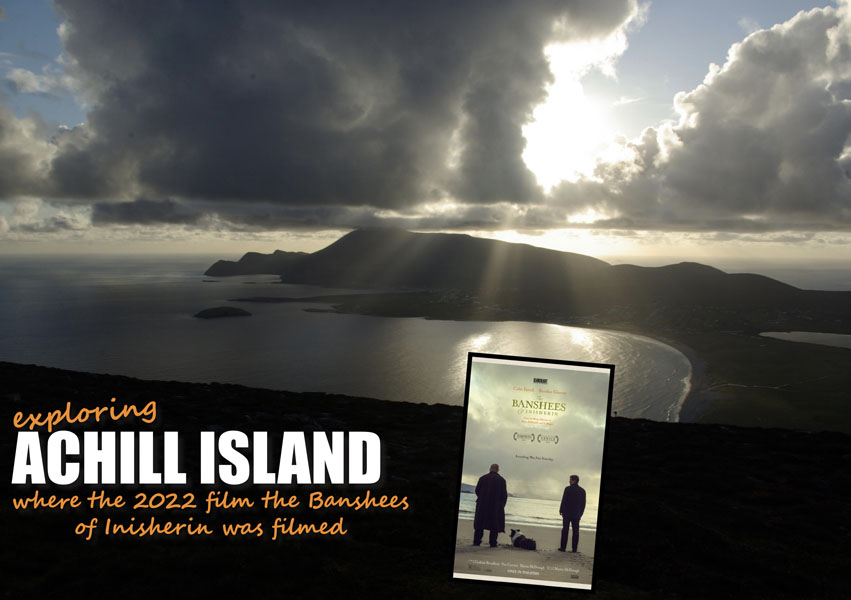 From greenlaning, wild camping, fishing, hill walking, surfing, windsurfing or scuba diving, your visit to Achill Island, the largest island off the West Coast of Ireland, can be as active as you want it to be. This place is one of the last wild frontiers on the western fringes of Europe and a great place to explore in your 4WD. The Island has been occupied for thousands of years and it is believed that at the end of the Neolithic Period (around 4000 BC) the island had a healthy population of between 500–1,000 people. This ancient Island has some cracking coastal and inland tracks to explore with an abundance of interesting sites to see along the way including Megalithic tombs, forts, a deserted village and the highest cliffs in Europe. 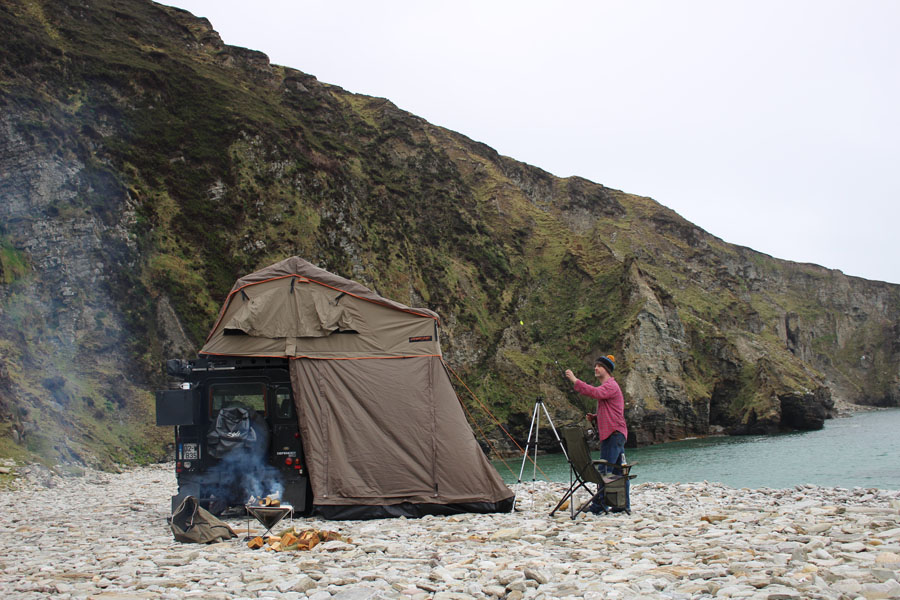 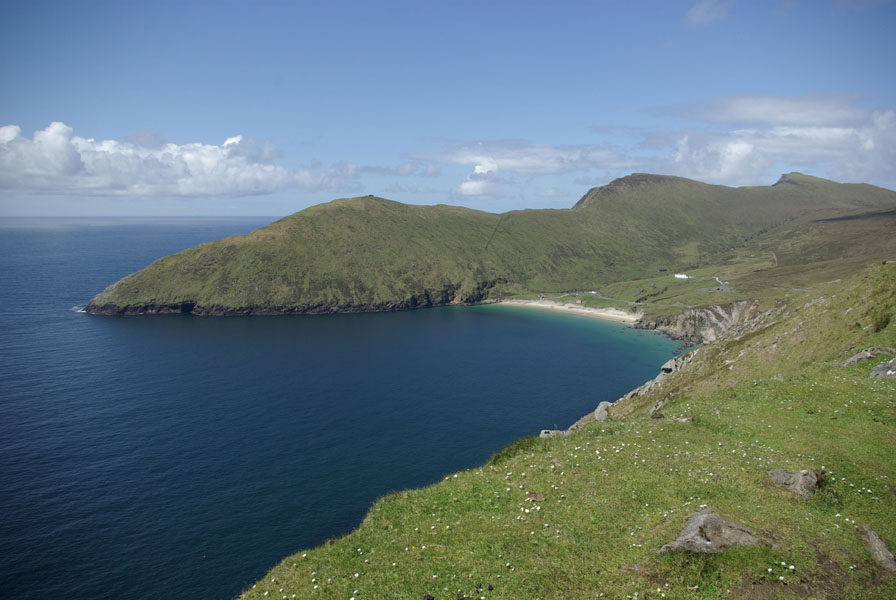 Achill is made up of parts of the Currane Peninsula in County Mayo on the west coast of Ireland, covering 15 miles from east to west and 11 miles from north to south, its total area is about 57 square miles with a spectacular coastline to discover, carving approximately eighty miles into the Atlantic Ocean. Today the island has a total population of just under 3,000 people with a large proportion of the population still speaking the native Irish Gaelic tongue.

Our journey began in the picturesque salmon fishing town of Ballina, Co. Mayo, located on the River Moy. In our well equipped Land Rover Defenders we took the Bangor road and drove through the rugged and wild Ballycroy National Park. 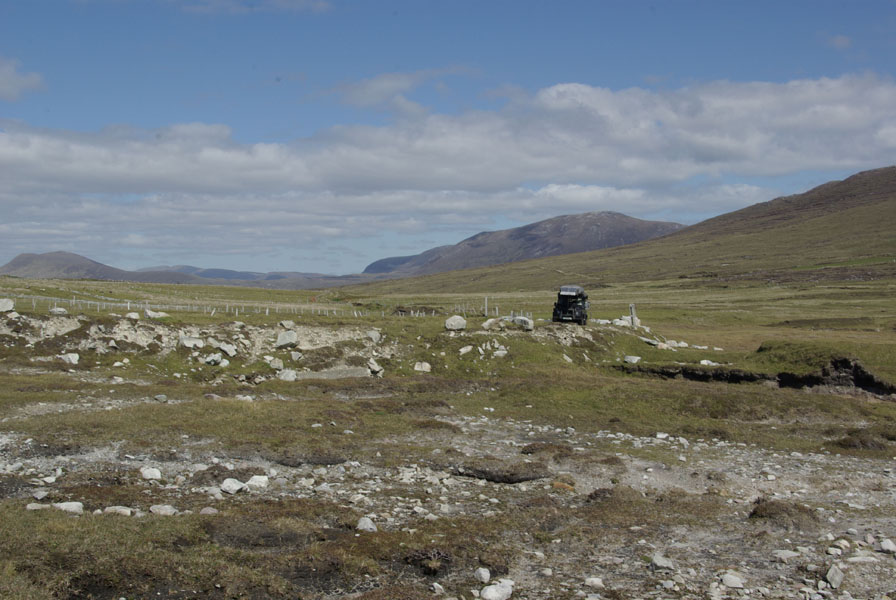 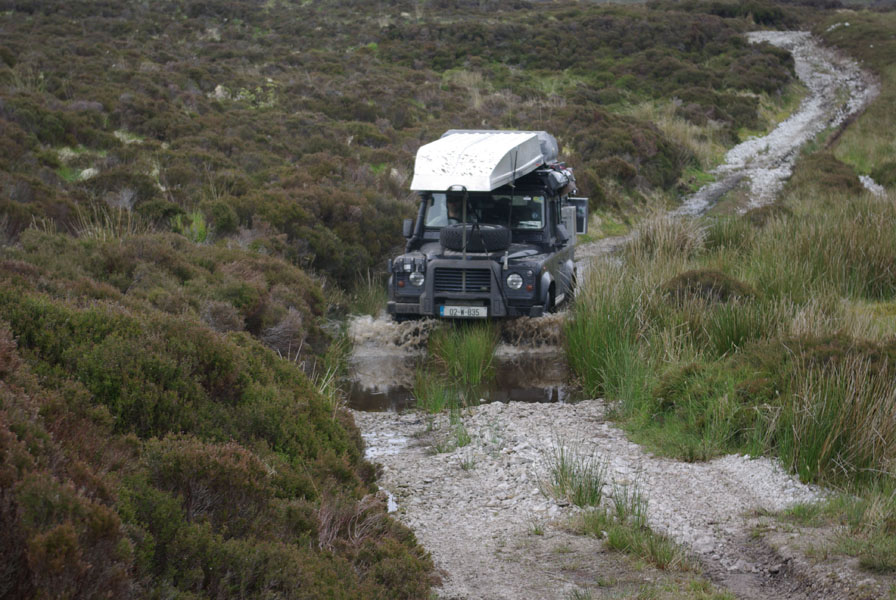 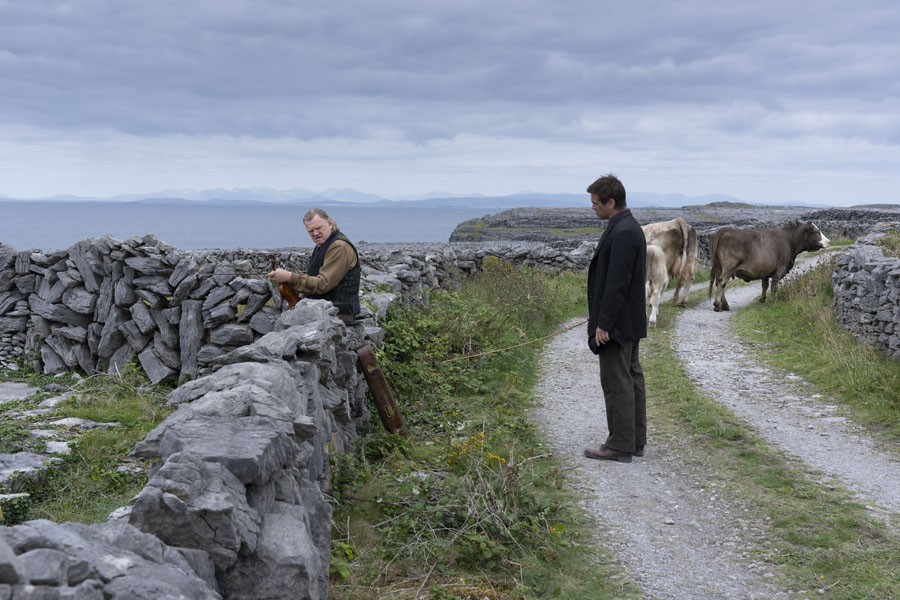 Filmed on location on Achill Island and on Inishmore, Co. Galway, the highly-anticipated Martin McDonagh movie, The Banshees of Inisherin, has been recently been showing in cinemas across the globe. -Brendan Gleeson and Colin Farrell in the film THE BANSHEES OF INISHERIN. Photo by Jonathan Hession. Courtesy of Searchlight Pictures. © 2022 20th Century Studios All Rights Reserved

As you approach the Island from the Ballycroy National Park, you will be presented with amazing views of the Islands mountainous landscape in the distance. Achill’s geography makes the Island the most mountainous Island in Ireland with some of its peaks including Slievemore (2,214ft / 671m), Croaghaun (2,192ft / 668m) and the 4WD accessible summit of Minaun Heights towering 466m. 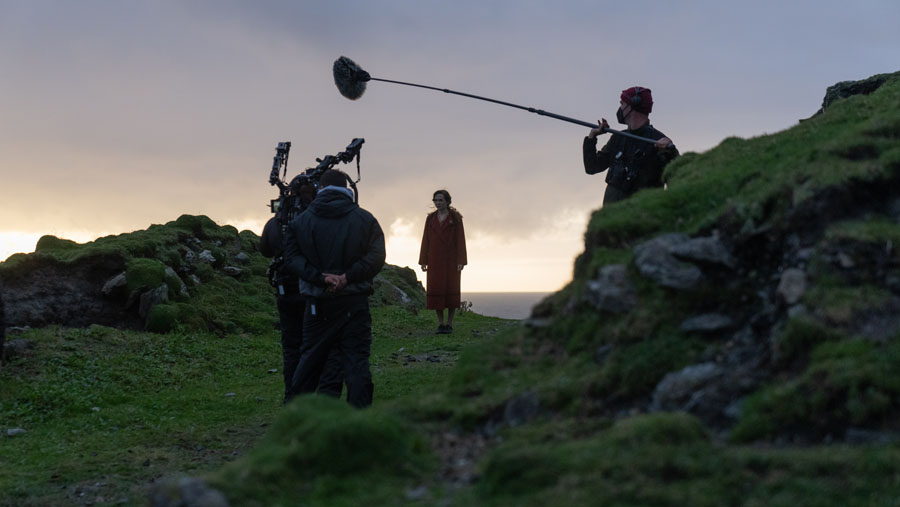 Kerry Condon on set of the film THE BANSHEES OF INISHERIN. Photo by Jonathan Hession. Courtesy of Searchlight Pictures. © 2022 20th Century Studios All Rights Reserved

The island boasts pristine unpolluted waters with five Blue Flag beaches and some great tracks to explore. If you are into sea angling or any type of fishing for that matter you will not be disappointed with the islands waters holding a number of sea angling records, most notably in 1932 when a porbeagle shark weighing 365lb was caught with a rod and line by a man called Dr O’Donel Browne. You can still see the head of this specimen mounted and displayed on the wall of the bar in the Achill Head Hotel in Keel. Other record fish caught off Achill include a 5.5kg Tub Gunard caught near Bullsmouth in 1973, and a Blue Shark caught off Achill Head in 1959 weighing a staggering 93.4kg 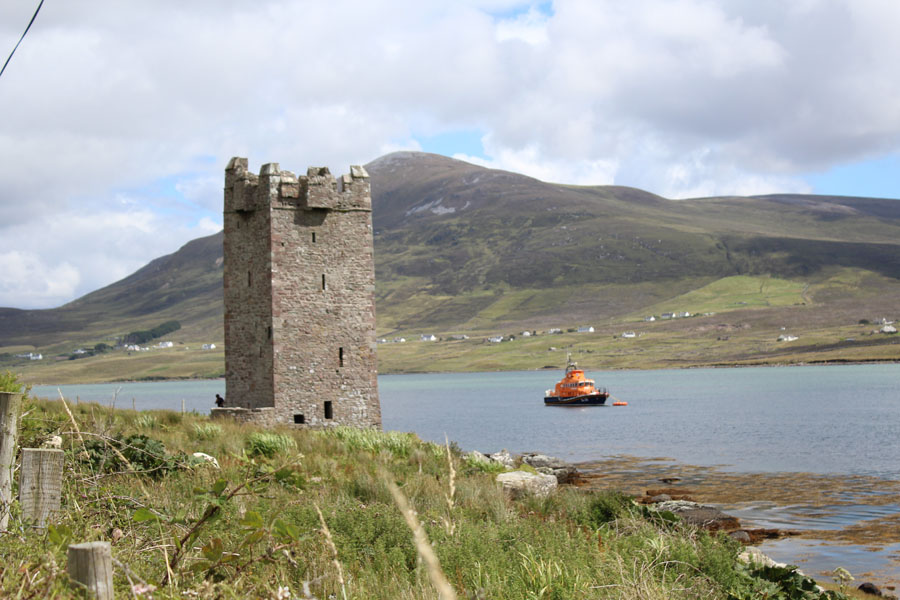 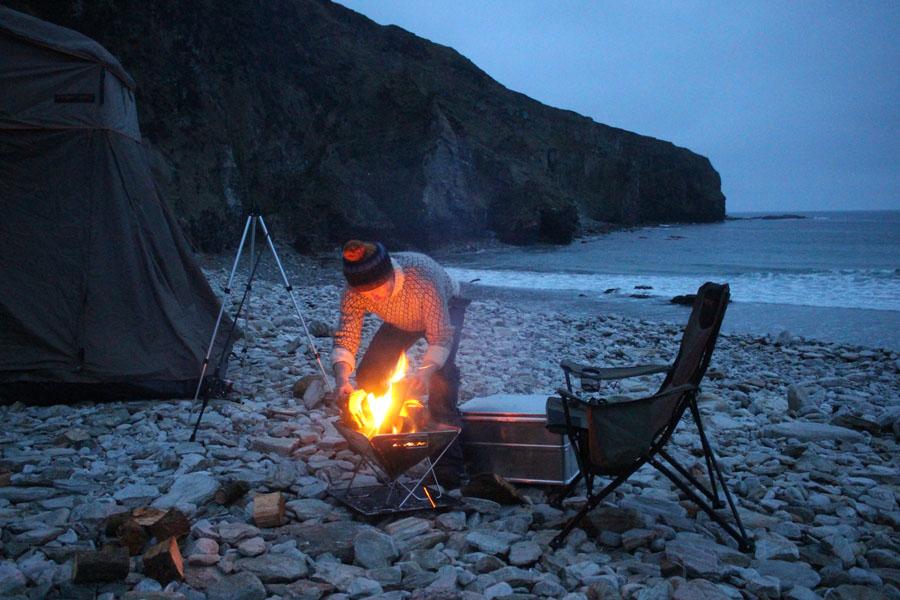 For the wild life enthusiasts it’s interesting to note that Achill was also the last breeding place in Ireland of the white-tailed sea eagle, the species being recorded there as late as 1875. The golden eagle became extinct in Achill about 1915 with the last reliable sighting was on Slievemore mountain in 1910.

One of the real attractions on this Island is the touring and exploring, If you are looking for remote coastal driving you will not be disappointed ,with narrow tracks hugging the coastline along the famous ‘’Atlantic Drive’. This drive covers 20 km of spectacular scenery starting at Achill Sound. The coast road runs close to the cliff edge and provides spectacular views of Clew Bay in the distance with its reputed 365 islands; you will also be able to see Croagh Patrick (764m) to the south-east, Mweelrea, the Sheefry Hills and the Maamturks in Connemara and the inhabited Clare Island to the south east. There are several lay-bys and parking spots along this stretch of narrow and twisting road, perfect for picnics or to stop and take a few photographs and explore this wild coastline. One of these lay-bys is at the site of the Spanish Armada memorial where a plaque was erected to commemorate the ship San Nicolas Prodaneli which was wrecked on the shore at Toorglass, Currane Peninsula, in 1588. 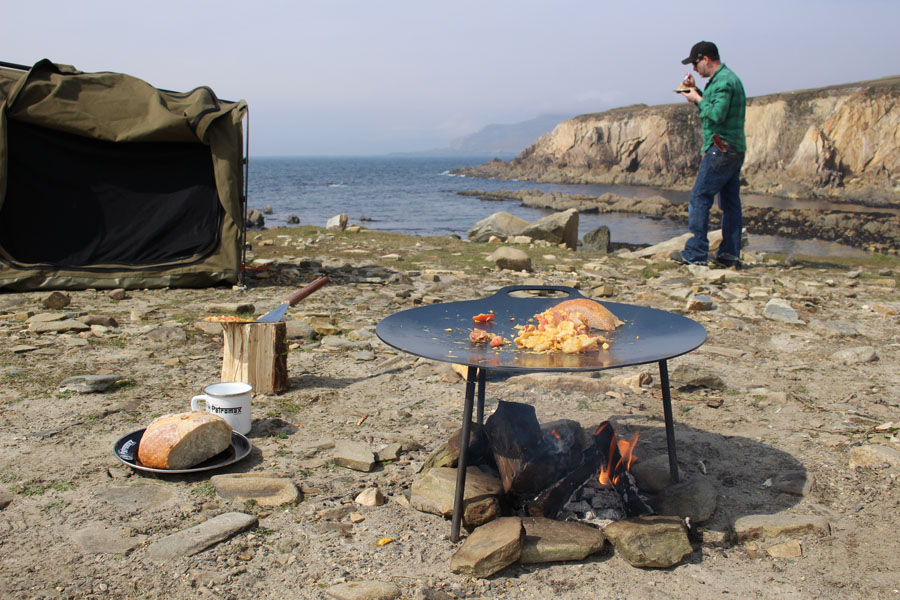 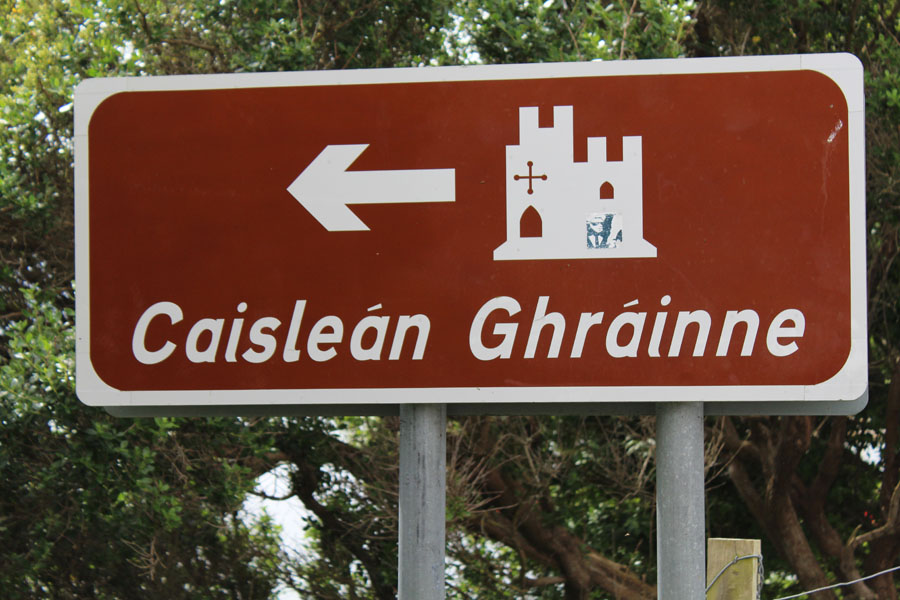 While in Currane it’s interesting to know that the founder of the British police force, Sir Robert Peel, once resided here. As you approach the Atlantic drive to the west of the island you will pass the Kildavnet Tower on your left, a 16th century Irish tower house that was formerly inhabited by Granuaile, the legendary pirate queen. This road ends at a junction with the R319, at which you should take a turn towards Achill Sound, your starting point on this scenic loop. This is a very photogenic drive and you will find yourself jumping in and out of your vehicle looking for that perfect coastal shot, with so much variety you will be guaranteed to get that memorable holiday snap.Another interesting site to visit on the Island is the deserted village, this ghostly like village at Slievemore comprises of the ruins of 100 stone cottages located along a mile long stretch of road on the southern slopes of Slievemore mountain. Some of these dwellings were occupied as summer ‘booley’ homes by local farmers. The area itself is rich in archaeological artefacts including megalithic tombs dating from the Neolithic period some 5,000 years ago. Local field systems and site remnants indicate that settlement in this area dates from at least early medieval times. So what’s a booley settlement? This ancient farming practice refers to living in different locations during the summer and winter periods, in order to allow cattle to graze in summer pasture. The cottages at Slievemore were used as summer dwellings by families who came from the coastal village of Dooagh and Pollagh, the Village is a haunting reminder of times past. An hour spent meandering from cottage to cottage, along the ancient track and through adjacent fields with their lazy bed ridges and furrows is a journey back in time. Sheltered under the slopes of Slievemore and hidden from the 21st century, this peaceful corner of Achill is a perfect place to understand what life was like on this Island in days gone by. 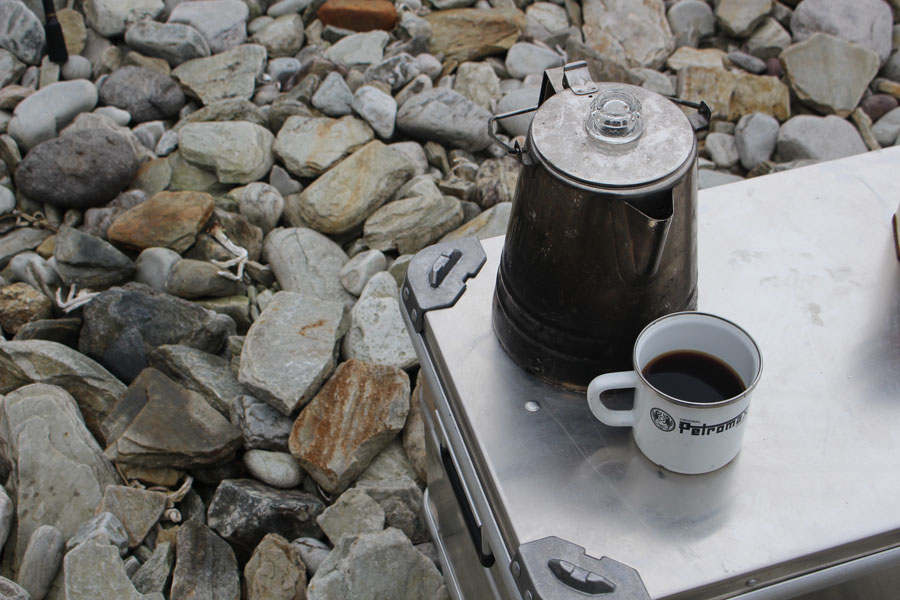 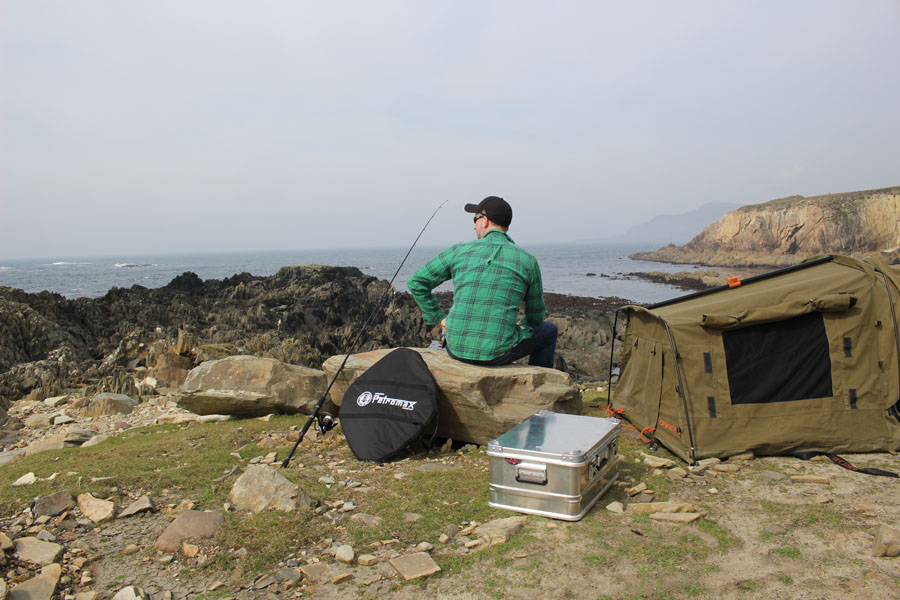 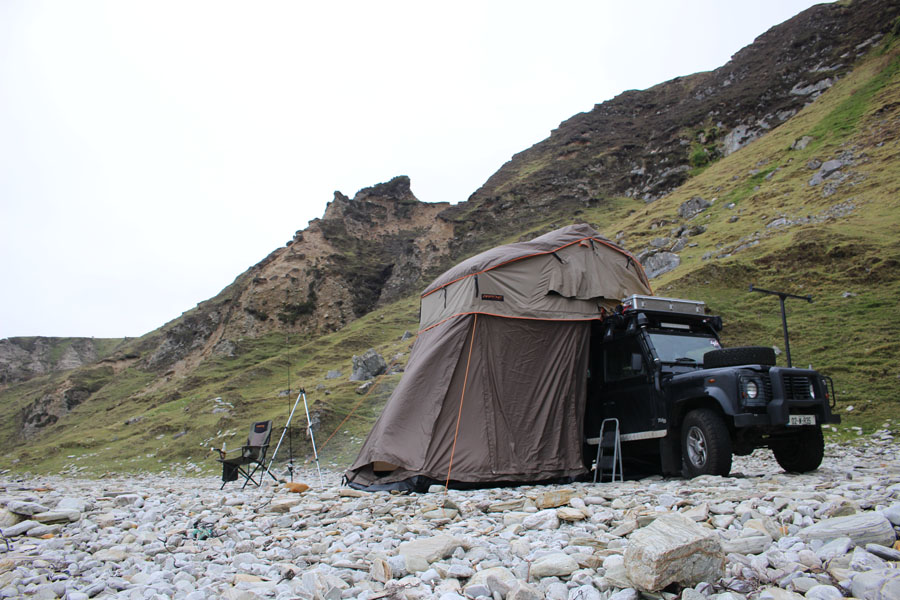 Another highly recommended track to take on the Island is up to the top of Minaun Heights, take the main road through Dooega, you will reach a left turn leading to Minaun Heights, we drove to the top of the mountain in the Land Rovers only to get stuck on the summit, best advice is to stay away from the boggy surface at the top. This steep road ends at a hill-top viewing point, giving a breathtaking view of Achill Island.

If you want to take a break from the touring and fancy getting your feet wet there are plenty of options. Watersports available on Achill Island include surfing, windsurfing, canoeing & kayaking. Equipment hire and tuition in many of these water sports activities is available from a number of local schools and providers. If you bring your fishing rod, the Atlantic waters around Achill Island and the Curraun Peninsula are home to a wide range of sea life and varieties of fish, making the area one of the best sea angling destinations in Ireland. 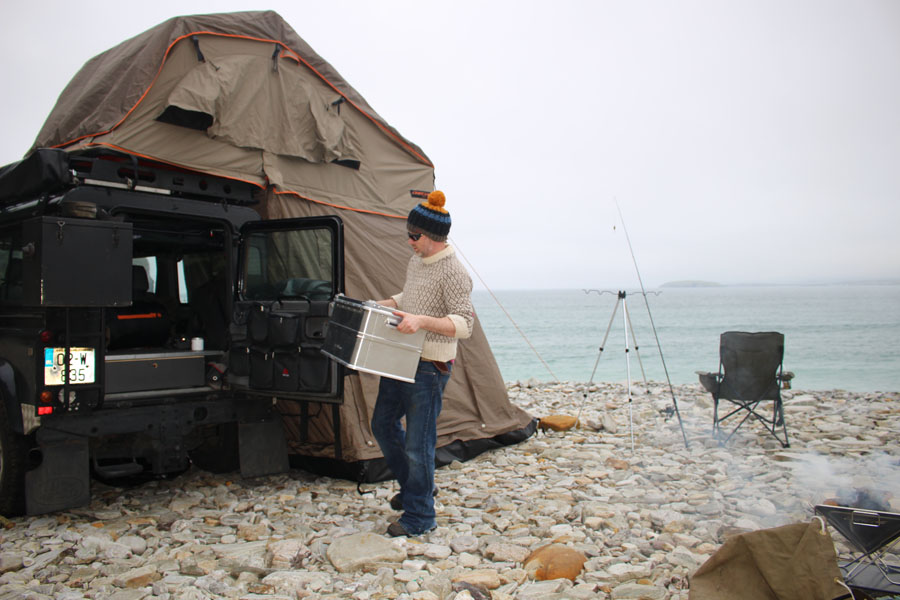 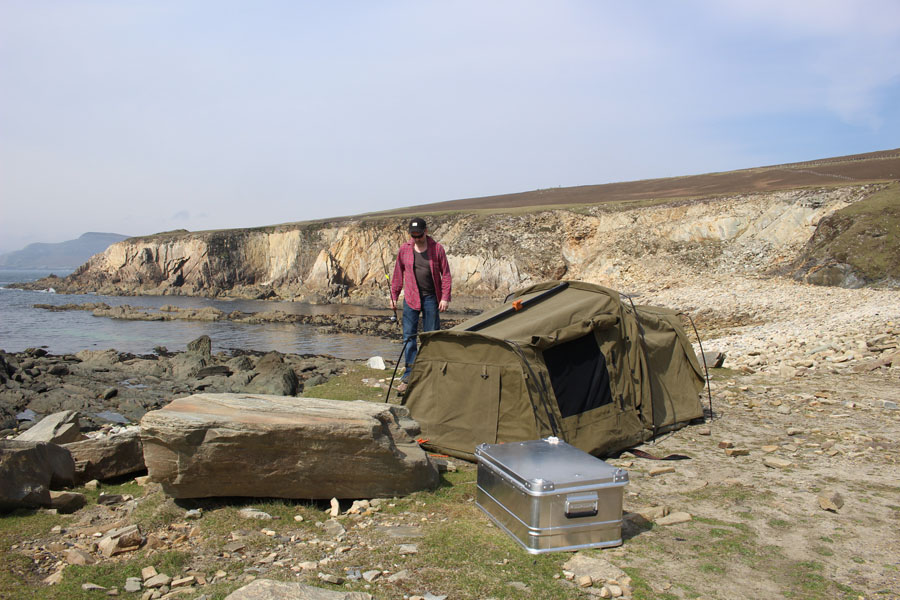 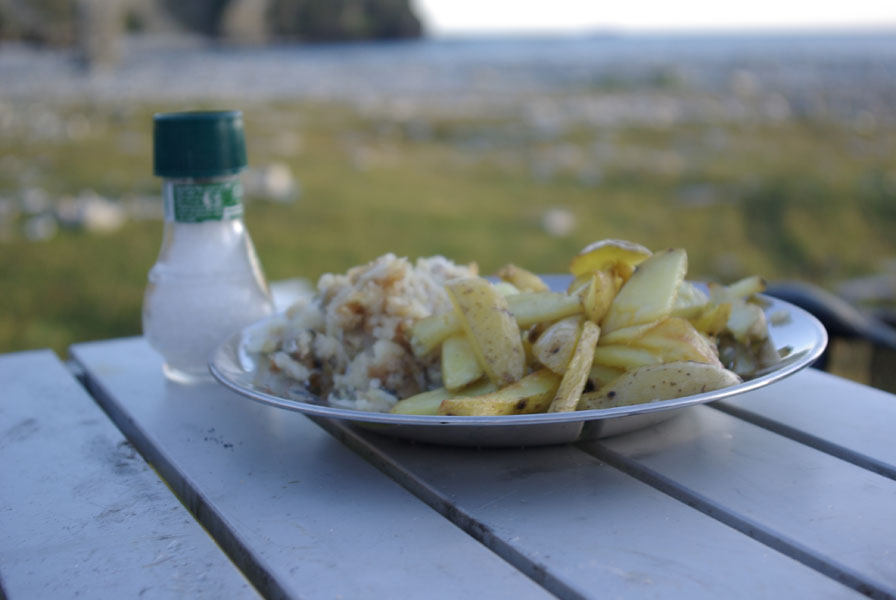 There are a couple of good campsites on the Island, we camped wild at the base of Minaun Heights and we also stayed at the well established Keel Sandybanks campsite, this is a 4 Star family run caravan & camping park, located on Keel Beach. This park provides full services for camping and caravanning.

Like anywhere in Ireland if you are camping wild be sure to follow the leave no trace code, similar to the UK, wild camping is tolerated generally though check if land is privately owned or commonage.

If wild camping is not for you there is another campsite located on the Island at Doogart, it’s called Lavelle’s and is located beside one of the Island’s finest blue flag beaches with direct access from the campsite.

It’s getting more and more difficult to find remote places that offer action packed activities and all located within a fifty mile radius. Achill Island is the perfect place to take your 4WD on an adventure for a couple of days, between greenlaning, fishing, great camping locations and lots of other adventurous activities Achill Island on the most western fringes of Europe has something to offer all adventurous spirits.

Colin Farrell and Brendan Gleeson in the film THE BANSHEES OF INISHERIN. Photo Courtesy of Searchlight Pictures. © 2022 20th Century Studios All Rights Reserved.

The highly-anticipated Martin McDonagh movie, The Banshees of Inisherin, has recently been showing in cinemas across the globe. Filmed on location on Achill Island and on Inishmore, Co. Galway, the movie reunites the stars of McDonagh’s breakout film ‘In Bruges’, Brendan Gleeson and Colin Farrell. They are supported by a cast of Irish actors including Kerry Condon, Barry Keoghan, David Pearse, Sheila Flitton, Pat Shortt, Gary Lydon and John Kenny.

The locations of the film showcase the beauty of Achill and Inishmore, and to celebrate this Discover Ireland produced two short ‘Behind the Scenes’ videos with interviews with McDonagh and leading cast members. 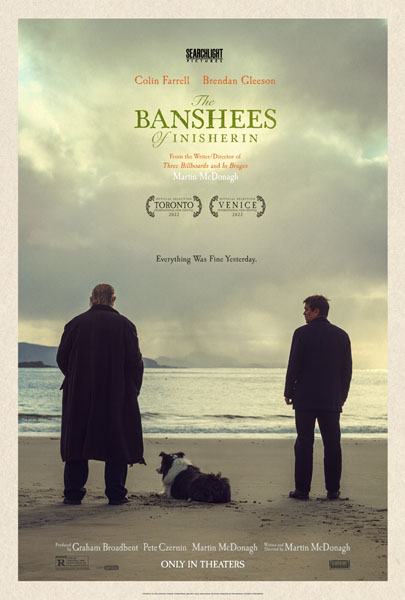 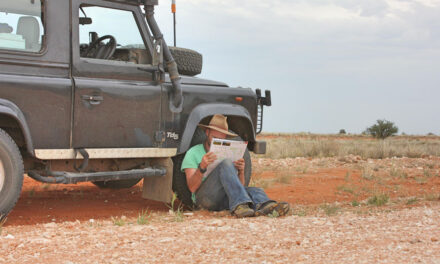 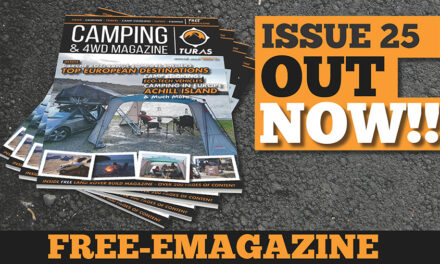 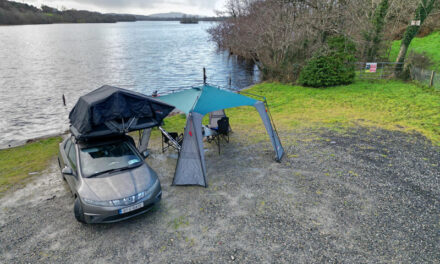 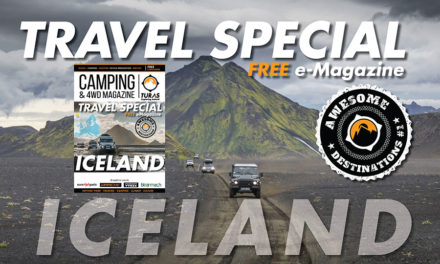 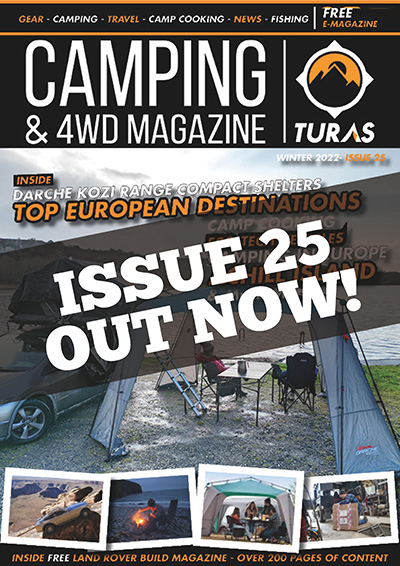